Fleishman-Hillard Paris releases a survey of French media and their attitude towards blogs: French j 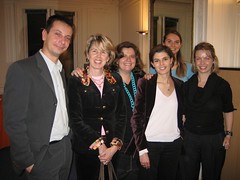 Had the pleasure of working with the folks at Fleishman-Hillard Paris to introduce The Corporate Blogging Book to an audience of French PR & marketing professionals as well as journalists. I made a presentation last night on Corporate Blogging (what, why and whither) at F-H’s cool office on the Boulevard Haussmann.

Paris in December is, well it’s always Paris and wonderful. But it was pouring rain and pitch black at 6:30 PM when the event began. A pretty good crowd straggled in nonetheless. After I spoke (in English), F-H Paris released intriguing results of their recent survey of French journalists: “What is the French media’s perception of the blogging phenomenon?”

Results of Fleishman-Hillard Paris survey of media and blogs

French journalists remain skeptical – as well as ambivalent – about blogs. A few highlights of the survey:

– only 45% of the 81 journalists contacted for the survey said they regularly consult blogs for story ideas, research, etc.

– 55% (a majority) said they don’t, citing blogs’ lack of credibility, not interesting, etc.

– In contrast, 63% of the journalists acknowledge that blogs influence public opinion

– In a bit of a contradiction, 40% said blogs will become increasingly important as a tool for media (23% say they won’t; 37% weren’t sure or didn’t answer this question)

All in all, sounds like French media is in transition when it comes to acknowledging the importance of blogs.